Animal Wisdom – What Animals Can Teach Us

As you may already know, I am a big animal lover and own a dog, Harley, and a horse, Shetan, myself. And this time, the inspiration for this blog post actually comes from Harley himself. Before I get into what inspired me specifically, I want to say that I think animals are just wonderful partners in general. Whether they live with us under the same roof, farther away in a stable or pasture, or just free in the wild. Animals are incredibly intuitive, well-balanced, and in tune with their surroundings, including other creatures (be it us or other animals). And they possess one quality in particular that I think makes them so enjoyable to be around: they always fully live in the present. They don’t dwell on the past and they don’t think about the future. They only deal with what is here now, in front of them, at that time. And this can be so helpful for us humans in many ways, but mostly it can help us too, to become more present and to live in the moment. They can help us to slow down our thoughts, escape our crazy monkey mind, forget about what else is there that needs to be done, and just be in the moment with them. I get daily reminders of that when I am around my animals and it has helped me a lot so many times. And you can feel an immediate difference in your mood and energy as well. But those aren’t actually the points I wanted to make. Let’s get back to Harley and why he inspired me to write this blog post.

Harley hasn’t had an easy life. I got him from a German Shepherd rescue in Los Angeles almost 6 years ago. Although I am so grateful that there are places like shelters and rescues and that without them so many dogs would be homeless, or killed, the truth is that a shelter is a horrible place for a dog. It’s loud, it’s often chaotic, they are in individual kennels and the most stressful thing is: they have no idea what is going on. They are in an unfamiliar environment, they don’t know if they’ll ever get out, they don’t get a lot of attention just due to the often large volume of dogs in one establishment and the little time caregivers have to take care of all of them, and most of them are probably scared. Add to that the fact that Harley must have grown up in a very stimuli-deprived environment and wasn’t socialized correctly as a puppy. This means that he is often just plain out overwhelmed by ‘real life’. He never learned that loud noises don’t mean danger, he never saw enough different people as a puppy to come to the conclusion that, in general, people are good and harmless. He is very suspicious of anything and anyone at first. He is cautious and super easily stressed in any situation that is outside of his comfort zone. And unfortunately, due to the lack of socialization as a puppy, his comfort zone is tiny: inside the house or in a protected area where he has his safe spots and is protected from loud noises (and even then if something is unexpectedly loud or makes a certain kind of sound, he gets startled and scared). Unfortunately I cannot give Harley a life on a farm in the middle of nowhere, where no strangers ever come by, where there are no loud streets and trucks and other scary things. So on a daily basis, he has to deal with and confront things that make him incredibly uncomfortable if not fearful. The other bad news is that if that period of socialization as a puppy has passed (at about 6 months) and he is no longer able to form those neural connections that help him to generalize about things (e.g. I have met 5 different people that were nice to me, so people must be nice, or, I have passed 10 scary, loud trucks, but they didn’t hurt me, so I don’t need to be scared of trucks, even if they’re loud,…), this can’t be made up later in life. Harley was 14 months old when I adopted him, so well past this point. This means that for the rest of his life, he will be challenged and easily overwhelmed by ‘normal’ things. With time and trust, he can learn to deal with them better, but he will never be anything close to a dog that has been correctly socialized as a puppy. This is challenge number one, and most definitely the toughest one, for Harley on a daily basis. So maybe after this part you’re already thinking ‘poor guy’. And yes, I agree, poor guy, because that is not a life a dog should have due to irresponsible behavior and maybe ignorance by whoever raised him.

Just like most German Shepherds and any other overbred breeds, Harley struggles with genetic health issues. He suffers from mild elbow and hip dysplasia, meaning his elbow and hip joints don’t sit correctly in their respective sockets. Over time, this will inevitably lead to lameness and painful arthritis. Depending on the severity, this can happen early or later on in a dog’s life. Although I have been feeding him joint supplements from day 1 and am very careful about the things I do with him that put wear on his joints (I live in a stair-free home and avoid stairs with him as much as I can, he uses a ramp to get in or out of the car, I don’t make him jump for no reason,…) he will eventually be in pain and have trouble getting up and moving.

About 3 years ago, I noticed that Harley had gained quite some weight despite the quantity of food and exercise remaining the same, and I also noticed that he became very greedy although he had never really been highly motivated by food and never begged. But there he was standing right behind me in the kitchen the entire time, just waiting for something to fall down, and everytime I held some sort of food, he basically hassled me to share it with him. Which is just something he had never done before. The other thing I noticed was his fatigue and lack of motivation to exercise, which is something he always loved to do and he had always been a very active dog. I knew something was up, and after a visit to the vet, he was diagnosed with hypothyroidism, meaning his thyroid didn’t produce enough thyroid hormones anymore. He was put on medication, just like humans, and has to be checked every year to see if the dosage needs to be adjusted (which has already happened once). This is not something that affects him negatively on a day to day basis, but he has to take medication for it for the rest of his life.

So just when you thought, ‘ok, that’s gotta be all’, I have to tell you about more challenges in Harley’s life. More health issues. Since the beginning of this year, Harley is suffering from an extremely rare auto-immune disease called Symmetric Lupoid Onychodystrophy. It is a disease that is not well researched yet and the cause is unknown. The symptoms of the disease include elevation of the claws from the nail bed and eventual, painful nail loss of all claws. When the claw has just elevated from the nail bed, but hasn’t fallen off, it is often less painful for the dog to just pull it out with forceps. You can think about it in terms of your own nails. I’m sure the pain is similar for dogs. But that isn’t the end. When the claws regrow, they will be brittle, misshapen, and crumbly. A new cycle begins until the claws will eventually come loose and fall off again. Sometimes the dogs start bleeding underneath the claw and secondary infections form. Harley has had all of these symptoms. And there is no easy or guaranteed treatment. He receives Omega 3 and 6 supplements and this treatment is also life-long. During the summer, over a span of 2 months, he had to receive 2 antibiotic treatments due to infections underneath two different claws although I did my very best to disinfect and clean his injuries to avoid infection. As a consequence to this intense antibiotic treatment, his complete gastrointestinal flora was destroyed, leaving him with indigestion, diarrhea, and flatulence. We are still recovering from this, rebuilding his gut flora with digestive enzymes and probiotics. It takes months for his digestive tract to regain full and normal functionality. The problem with the claws will persist. Sometimes more, sometimes less. We are currently lucky that he has had fewer problems over the past couple of months. Hopefully this will continue.

Now you may think ‘Geez, Frauke, this is so depressing and sad. Way to be a Debbie Downer. Why are you writing such a negative sounding blog post?’. Well, I needed you to have this full backstory to get my point across and to understand the scope of it. Because despite all of these daily challenges, struggles, pain, stress, and discomfort, Harley is so full of energy, and joie de vivre, and loves to play every day. 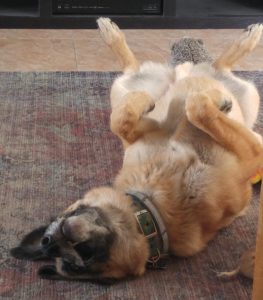 He doesn’t define himself by his struggles and health issues, but by the way he wants to live every day: happy, playfully, and making the most of every day. He doesn’t wallow in self-pity, he just lives. With its ups and downs, but most of the time, he is an extremely happy dog. And he inspires me with his energy every single day. How often do we get stuck in self-pity and thinking about all the bad things that are happening to us? And then we suffer and just think everything is bad. I admit that this happens to me on a regular basis, sometimes worse, sometimes not so bad. And then I look over to Harley and there he is, on his way over to me, throwing a toy to my feet, asking me to play with him. And I think: ‘Geez, you’re right. You’ve got problems too. But you don’t care. They don’t define or control you. You just want to play. Now’. And I have to smile and I instantly shift my energy and can continue my day with a completely different mindset. And I think that the animals got it right. And that we need more of this in our human lives. Less dwelling on the past, on the problems, the struggles, the challenges, and more enjoying life for what it has to offer, as long as we still can. There will always be bad days and bad things happening (to us), but they don’t need to control our lives. Next time you catch yourself getting sucked into this downward-spiral, think of Harley. Be more like Harley. Life’s got more to offer than suffering. And animals are one of the best ways to help us remind of this and guide us to more joy and happiness.

Have you had similar experiences with your pets? Maybe after some reflection? What is one lesson you learned from animals?